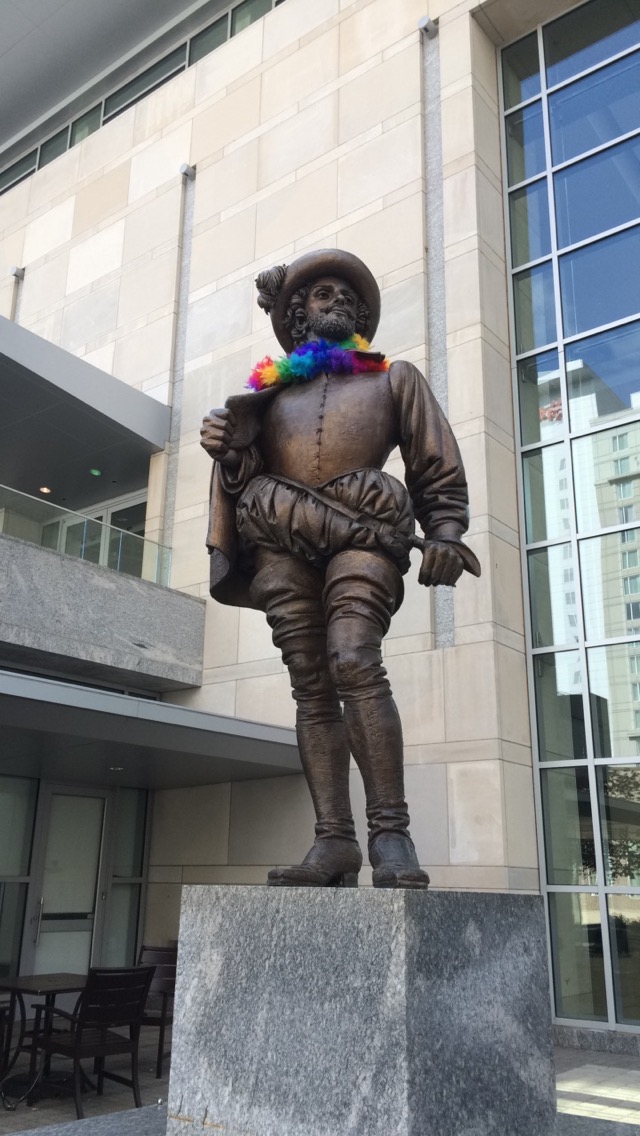 This photo, a statue of Raleigh, NC namesake Sir Walter Raleigh, was draped with a rainbow boa during protests over the infamous North Carolinian HB2. Photo was taken by Wikipedian “Indy beetle.”

In Suzanne Tick’s essay “His & Hers: Designing for a Post-Gender Society,” she argues that the more multifarious gender perspectives allowed by an increasing number of women in the workforce also correlates with an increased move towards gender neutral design and perhaps even a full acceptance of the theory of gender as a spectrum. Tick focuses her argument on three design fields: architecture, fashion, and interior design. In short, her argument stems from the concept that Modernism, a vague term for much of the design of the mid 20th century, was fundamentally tied up in a generally sexist paradigm of self-glorification and mass production, with women being consigned to ancillary roles (Tick). However, Tick believes that an increasing widespread internalization of feminism in the west is bringing about a move away from strict masculine industrial hardness to a more sustainable model focused on the feeling of living spaces. Furthermore, she argues that this has already picked up a fast pace in the fashion world, where this intersection is increasingly leading towards a uni-gender fashion scene, where feminine clothing for men and masculine clothing for women are becoming par course, leading to a stylistic androgyny that comes hand in hand with the increasing resistance against the gender binary (Tick). Tick ties this into what is by far the most symbolic fight over gender identity: bathrooms. Finally, Tick suggests that the move to have more gender neutral restrooms ties into a greater need for accessible design in regards to alternative and nontraditional gender identities, something she ties in with the Americans With Disabilities Act as worth enforcing through legislation.

Through this essay, Tick hits on some of the more interesting aspects of the “gender revolution” we’re on the brink of. While some of her points may be arguable academically, especially vis a vis the entire modernist movement being dominated purely by masculine ideals, Tick shines when she points that, on the more distant edges of society, we are increasingly moving to a more uniform acceptance of more diverse gender identities, which will define much of the subtler aspects of our world for decades afterwards. However, I must sadly note that these arguments do seem a bit overly optimistic in light of current political events. While the predominantly liberal artistic class will likely be quite accepting of these values in maybe even a decade, issues like racism and gay rights, which are issues spanning back beyond 60 years in American politics, still play an out-sized role in the problems of the U.S., which doesn’t suggest as much utopian progress will be made as Tick hopes. However, despite this, it’s still important to make the first step.