A Look at the History of Adams Morgan

This source is extremely relevant to my research because it shows the history of the neighborhood. It helps solidify my main claim, which is that Adams Morgan has evolved to become one of the most diverse neighborhoods in DC. It is cool to include this as evidence because this was where it all began. That conference was the first step towards racial, ethnical and cultural diversity in the Adams Morgan. 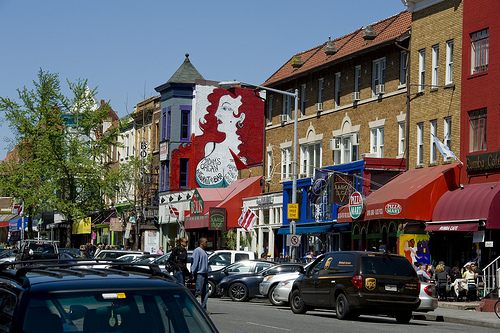 In this interactive Adams Morgan Timeline, created by Envision Adams Morgan, it is possible to see historical events and pictures from the neighborhood dating back to the 1900s. Most of the events listed in the website mention either gentrification or desegregation, two very important concepts in the history of Adams Morgan. The timeline pinpoints when both started to occur more frequently, and by the time it reaches the 2010s the words appear less often since the process of gentrification and desegregation are close to completion.

This website is very interesting and can contribute a lot to my research because it gives me a snapshot of Adams Morgan history. By skimming through the timeline I can find historical events that I would further like to explore, and then all I have to do is run a google search. One of the events that most interested me and will aid me in my project occurred in 1981, when latinos started to assert their presence in the sociopolitical matters of the neighborhood. This helps exemplify the path to diversity, which is the main theme of my research.