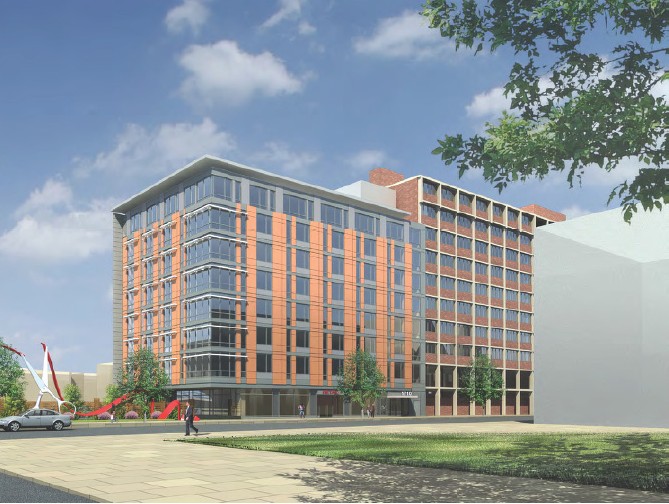 The Westmoreland Apartment Complex is an apartment complex located in 1730 7th street NW. The building is supposed to cater to the low-income residents within the community.

The Channing E. Philips is an apartment complex located in the 1750 7th street NW. The building is currently being renovated. However, the building so far has glass windows and a metallic outer frame. This apartment complexes are supposed to be for low income residents within the community and cater to those who make 60 percent median annual income. When the apartment is done being renovated, it should look like the Westmoreland Apartment Complex next door. Elbo Market located in the 1700 block of 7th street

The Elbo Market is one of the newer shops opened up within the 1700 block of the 7th street NW neighborhood. The Elbo Market was the previous location of John’s Place, a former local bar. The outer appearance of the building is simple. The overhead of the convenience store  is green with white letters which states the name of the store. There is a large sign outside on the outside of the window, which states “Now We Accept EBT”. This is a positive since the community is opening more low income housing complexes and this neighborhood is known for holding low income residents. I visited the residential neighborhood 700 block of S street, around the corner of the busy 1700 block of 7th street NW. I went there to see if there was anybody who knew anything about the changes within this surrounding community. Unfortunately, I was unable to find available people. However, I observed the physical characteristics of the 700 block S street houses. The houses compared to the rest of the neighborhood are much more livelier. The row houses surrounding 714 S street NW are painted with pastel and neutral colors such as nude and a faded mint green. The buildings surrounding the 5 row houses look archaic and are deteriorating. Across the street, the buildings are of the same brownish/tannish color. The sides of the brown colored building are filled with graffiti. The houses look newer compared to the rest of the building surrounding that neighborhood. The apartments in the 1700 block of 7th street NW are all currently being remodeled. These buildings are for those within the section 8 and affordable housing program in this Shaw neighborhood. The inside of the lobby has white walls, but the back wall has a picture of Channing E. Philips. The apartment complex is named after the late Channing E. Philips, who was an anti-poverty activist.

I visited the location the man from Log Cabin Liquors claimed to formly be John’s Place. That area/building is torn down and now a corner store called Elbo Market located at 1731 7th St NW. As I entered, I was immediately greeted by friendly workers in this convenience store. However, the store clerks were a bit uneasy with me entering the store and asking questions about the neighborhood and their place of establishment. I met with a nice store clerk named Elias and he gave me very limited information about the neighborhood. Elias has been working at Elbo Market for about five months now and was very unsure to when Elbo Market opened, but does it believe the store became apart of the neighborhood five to six years ago. Elias described the minimal changes within the neighborhood such as traffic light reconstruction and the new  apartment buildings across the street located in 1700-1730 7th street NW. From his descriptions, it seems as though the 1700 block of 7th street NW are receiving the effects of gentrification.

During my visit in the 1700 block neighborhood of 7th street NW, in search for John’s Place, I visited the Log Cabin Liquors store to learn more about the neighborhood. I met the owner of the establishment and he claims the business has been established for almost 30 years. The owner seemed very uncomfortable with me asking questions and I didn’t get his name down. However, he gave me very limited information about the neighborhood and “John’s Place. According to the owner, John’s Place bar/club was located across the street from the liquor store. John’s Place was shut down 10 years ago due to another shooting either inside the club or around the area.