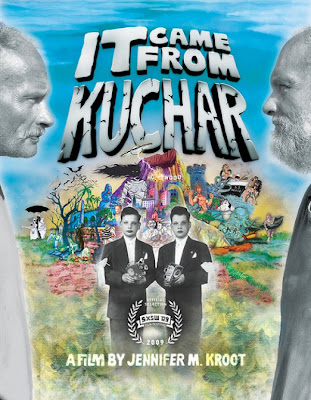 It Came from Kuchar is a documentary by Jennifer Kroot about the brothers George and Mike Kuchar who alongside Andy Wharhol helped shape the underground film scene. Using clips of the Kuchar brothers films and interviews with them and their admirers and friends, the film is a “hilarious and touching story of artistic obsession, compulsion and inspiration”. It Came From Kuchar makes a tribute to the Kuchar brothers by intertwining the brothers’ lives, their admirers, a history of underground film and a “greatest hits” of Kuchar clips into “a mesmerizing stream of consciousness tale.”

An underground film is a film that is “out of the mainstream either in its style, genre, or financing.”  In the late 1950s this term began to be used to describe early independent film makers operating in San Francisco, California and New York. George and Mike Kuchar were among many filmmakers in the era that would later help shape the underground film scene. George and Mike Kuchar were twin brothers from the Bronx in New York who studied commercial art. The brothers started making 8mm movies which were showcased in the underground film scene. George and Mike used filmmaking to express their identity and struggles through low budget films using friends and family as actors. During the interview, one of George’s and Mike’s acquaintances describes both of them as “borderline crazy, but in a good way”, explaining that George’s craziness was completely social and engaging, while Mike’s was more held in. This description of the brothers seemed to be accurate and reflected in both of their films style.

George and Mike Kuchar used filmmaking not as a commercial tool, which is what made them pioneers of the underground filmmaking scene, but as an organic and beautiful way to express reality and their own feelings, curiosities, and thoughts. George’s movies seemed to explore a range variety of subjects mainly in a comedic manner. Mike Kuchar’s films were not written beforehand and finds out what his movies are about as he makes them. His movies were more serious and introspective films, and more about coming to terms with your inner self. In the documentary he explains that the films he made felt like they were meant to be made, and that there is a picture inside of you that you have to bring out. Collaborating in filmmaking from an early age, George and Mike Kuchar seemed to go into very opposite paths in the following years regarding their films. It Came from Kuchar focused more on George’s life and films and seemed to explore more of what his movies were about than Mike’s.

After watching the film, I was inclined to learn more about the brothers themselves and their lives. Reading a little bit about their beliefs and personalities, the clips from their movies shown in the documentaries started to make sense. For example, both of the brothers were raised very strictly catholic, and George had a sexual preference that leaned towards men. Without being able to have his questions about sexuality and himself because of his religion and upbringing, George explored sexuality in a lot of his films. Influence from his father’s taste in trashy novels and cinema also had an impact in his work, which a lot of people seemed to find too trashy or graphic at some time.

George Kuchar’s honesty in filmmaking is fascinating. One of the people interviewed said something that struck with me throughout the rest of the documentary about how their films shows how you can still make something profound that has great beauty, and at the same time doesn’t take itself too seriously. In Wild Night in El Reno, George Kuchar went out with his camera during the storm and created a beautiful film of the before, during and after of the storm.

George Kuchar also uses setbacks to advance his story line and enhance the film he is trying to make. For example in one of his films, he had an actress drop out of the movie halfway through shooting and he writes the event into the film and uses it as inspiration. He uses real life events to add drama and in a way rawness to his work. An actress in one of his most famous productions, Hold Me While I’m Naked, had to drop out because she caught pneumonia after spending hours in a drafty shower, and George wrote this scene into the movie to help add drama to the story.

What I found very intriguing watching the documentary was the contrast between how George and Mike talked about their films themselves, and how their friends and acquaintances, and admirers talked about them. George and Mike Kuchar seemed to just make films about whatever they wanted, no agenda, they seeked to find answers to their questions and curiosity through filmmaking, making use of reality and the real world to enhance the story they were telling. Hearing the people interviewed in the film sometimes analyse too much their work, and hear them talking about it helped me understand exactly why they are so “glorified” in the underground filmmaking scene. Their production seems natural, it can start to be about one thing and ends up being about something entirely different, and with that they really explore reality, ethics, making something very organic and real. Their movies weren’t about one specific thing, it was about everything, which in turn reflected reality, where everything happens. Seeing what he thought to be a flying saucer, led George to explore a different side to myths; struggles to answer questions about sexuality, led him to explore that in his films, and so on. Their personalities also had a voice in their films, George (from what the documentary showed) was an outgoing and funny guy, created very comic movies but that at the same time became serious and had substance, had a message. He was in total control of his films, relying on friends and family in order to create something real. One of his friends describes George’s filmmaking as him going into your brain and taking over, causing you to have various mini breakdowns throughout the film as you are getting pulled and out of the story all the time.  Mike seeming to be more of an introvert, created films that question the innerself, express images inside your mind that need to come out. In both ways, their “realness” and organic way of making films is what makes them so important in the underground filmmaking scene as they create “real” work.

The documentary itself, seemed to capture the essence of the brothers and create a film that at the same time “honored” the Kuchar brothers, making something engaging, funny, and organic.