“I really started dreaming… and broke out of my shyness when I got to Howard University. My first acting class was an Intro to Acting class with Professor Bay, who really broke me out of my shell, encouraged me to follow my dreams and make them a reality.”
– Lance Gross

As described with this quote from a Howard University Alumni, this school helped shape Lance Gross into the person that he is today. The Mecca, in particular, are individuals who shape the way students view their rhetorical space, and it helps them navigate their way throughout college. For Gross, his Mecca was Professor Bay. These gifted professors influence the way that students see the world. This community also helps students discover their true passions and give them the resources to flourish.

I think it’s safe to say that pretty much everyone has seen the most recent Pepsi advertisement with Kendall Jenner. There is so much going on in the commercial that it is hard to even know where to start. There is also so many questions as to who was in charge of the marketing campaign and who exactly thought that this commercial was a good idea. The commercial tried to make protesting something cool and in most cases, this is not the case. Actually, protest is usually for a cry for help and to stop injustice from occurring. There is also this “white savior” mentality that is heavily present throughout the commercial. Kendall Jenner takes off her wig and hands it to her black assistant who looks genuinely confused and rushes out to the protest filled with people of color, then hands a refreshing Pepsi to the officer. After, the cops and the protesters are all getting along finally living in peace and harmony. This commercial fails on so many levels because most civil protest can not be stopped with a refreshing Pepsi. Usually, they are handled with arrest and chaos. There is also the question of if the cop were to receive the same Pepsi from a person of color, will they be met with the same response Kendall Jenner received? Today I attended a discussion featuring soulful and consequence rapper Common. During his time here he freestyled for the audience and brought to light many underlying issues prevalent within our society. He also talked a lot about activism and the importance of finding our voice in whatever type of activism we plan on taking part of. He used Mohammad Ali as an example, a man at the height of his career knew that it was his duty to fight for what he believes in and showcase the injustice that exists in the world. Common as a rapper recognized that it is also his duty to bring to light issues that exist in our society. He does this with his song with John Legend, Glory. The moving movie Selma, illustrates the negative times during the civil rights movement and the song beautifully captures the message director, Avry DuVernay tries to bring across. It is important to use our platforms and voices to speak out on what matters most.

Rap Freestyle is something that has been around for years and is style common till this day. Some are hailing bBig Sean specifically because he is being quoted for saving rap music. His flow and music style has made him come hailed as the greatest rapper of our generation. The album, To pimp a Butterfly, not only focused on racial issues that effect everyday black americans. Lamar has transcended beyond traditional rap and has broadened his surrounding by working with artists like Beyonce and Taylor Swift. What is important about Lamar is he still focuses on what makes him great which is his freestyles. These are what established him as a metaphor king and he never seems loose track of his humble beginnings growing up in the hood of Compton, California. He is able to connect to not only his fans but everyone who can find some sort of relationship with his albums and his freestyles.

“A #2 pencil and a dream can take you anywhere.” – Joyce Meyer

Usually, my parents send me quotes from different motivational speakers that are meant to inspire me and help me throughout my day. I thought this particular quote was interesting but also contradicting because it makes such a broad and generic claim. I think it is east to say that your dreams can take you anywhere but if you are at a continuous disadvantage from other people it does not hold any support. This quote picks and chooses who can benefit from it and it seems like it only applies to certain groups of people. Not everyone is born with the opportunity to make such broad claims. Everyday people have problems that they go through and should not be told that if you just dream anything is possible. That is not the case for everyone and this statement holds no support.

Samuel Beckett is letting his audience know that is perfectly okay to fail. The only thing is if you fail you fail with grace and learn from that failure. Once you learn from it figure out what you can do differently and improve on it. Beckett used simplistic terms when referring to failure to talk to the middleman. His goal is to reach individuals who may not look at failure as beneficial and will instead think because they failed its the end which is not the case. I think that if Beckett used any other forms of punctuation it will definitely affect the meaning of the quote. The periods emphases a declaration and makes a statement. If the author used an exclamation point it will lose its meaning and make it seem like a motivational statement.

David Fleming concludes his City of Rhetoric by arguing that “education [should be] oriented to the ‘strong publics’ of decision making rather than the ‘weak publics’ of opinion formation” (205). For Fleming, then, composition courses, which traditionally have asked students to write in an unaffiliated decontextualized sense as some kind of generalized skill or process, should instead have students write essays designed to raise campus and local awareness.  In other words, we need to learn a language that privileges both mobility and conflict over harmony.

I agree that it is important to answer questions even if you don’t know if it is correct. But I also believe that it depends on your environment and the way you were brought up. Some people were not raised to ask questions so openly. It also depends on the people around you and how receiving they are to that information. I do recognize the importance of getting out of your comfort zone and gaining knowledge. I just wish there was a common way for everyone to ask their questions without feeling uncomfortable.

This week on twitter has been eventful. Recently, the new hashtag, #hurtbae, took twitter by storm. The premise of the video was for this young girl confronting her ex-boyfriend in order to find some sort of comfort and closure. In the video, the girl started crying because she started to recall how they met and eventually how he ends up cheating on her many times. Many people around the nation started emphasizing with #hurtbae and felt her pain. Throughout this, it was notable that everyone on twitter could relate to the former couple and because of the humor side of twitter, the tweet reached thousands of people.

This Sunday, I watched the Grammy awards with a group of friends, and as the true Beyonce fan I am I was rooting for her to snatch the most prestigious award of the night,  Album of the Year, for her critically acclaimed album, Lemonade. This year I had high hopes for Queen B because of the cultural significance of the album. I remember when it first came out and how every song made me cry because of how much detail she put into the music and how precise every music video was. She made this album to empower black women and give us the voice we never had. As a lover of music and Beyonce, It shocked me to see her not win album of the Year, let alone any of the non-genre categorizes. This is not to shade Adele. I thought that the album 25 was well written, but it did not have as much of an impact as Lemonade. This was very evident throughout 2016. First with her controversial Superbowl performance, the announcement and selling out of the Formation World Tour without an official release of the album for several months, and the extravagant release of her magnum opus, Lemonade. Till this day Beyonce has refused to release that album for streaming. She wants people to buy the entire album, and not just listen to singles. She takes her listeners on a journey of self discovery and makes it clear to the world that she is a black woman and deserves respect because she has worked for it. She channels the African Goddess, Oshun to connect black women to their African roots and helps us embrace our blackness. The biggest blow was that everyone knew that Beyonce was snubbed. She has been nominated 3 times for album of the year and each time it impacts people in ways unimaginable. With I Am… Sasha Fierce she went the rout of pop…. still no Grammy, BEYONCE self titled she broke records within minutes with no advertising or prior notice…. still no Grammy, and with Lemonade she showed her versatility and became critically acclaimed….. and still no album of the year. Their is a systematic problem with the Grammy’s. Only 3 black women have won album of the year and the most recent recipient, Lauren Hill won the award over 20 years ago. The Grammy’s have no problem asking black artists to preform for these awards shows but have a hard time with giving these awards to Black Artists. Clearly there is a bigger problem and the question is what does it take for black people to gain the recognition that deserve? 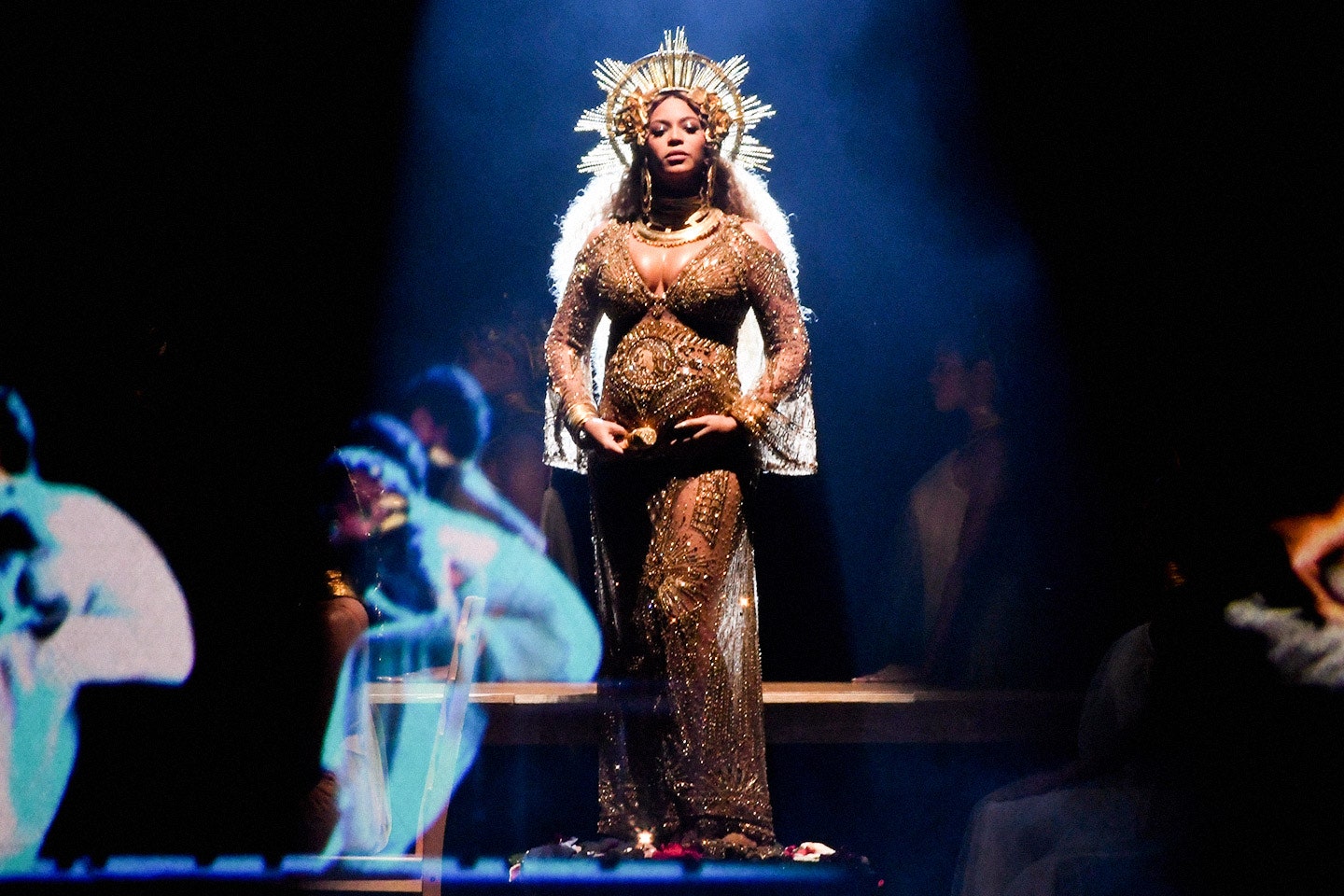 This semester I am taking a class on Beyonce and her influence in Race, Gender, and Sexuality. This week we were required to read an article called Giving Face by Nicole Fleetwood that focused on the success of Diana Ross, her calculated rise to fame, and her status of an icon. The article also focuses on how artists gain a certain level of success and start to concentrate on certain issues they feel are important to them. Specifically, once Ross began to establish herself as a solo artist her   queer iconicity became more recognizable with her hit song, “I’m Coming Out.” This song, in particular, established her as a queer icon. Because of the structure of this class, we related it to Beyonce. Beyonce followed similarly in Diana Ross’s footsteps most notably in her award-winning album, “Lemonade,” and her controversial Superbowl Halftime performance speaking out on police brutality. Like Diana Ross, Beyonce waited until later on in her career to become politically vocal in issues that affect everyday people. Ross recognized that her iconicity needed to be established in order for her to freely speak about issues she cares about and she needed to gain a larger audience so that people will listen. She has paved the way for artists, like Beyonce, to build their own level of iconicity and use their platform to influence others.