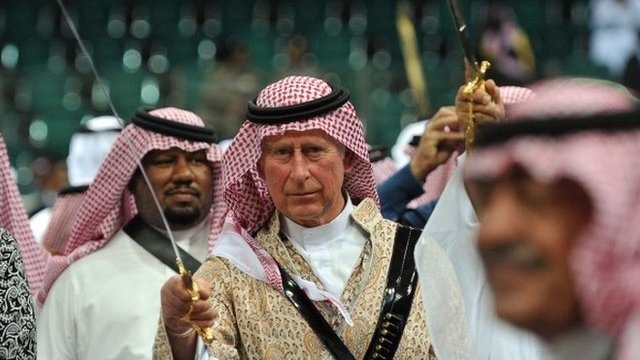 Yesterday, BBC News reported that Prince Charles was visiting Saudi Arabia while on an official royal tour. According to the article, “the prince was taking part in the annual Janadriyah Festival, a celebration of Saudi culture and heritage” marked by the men  wearing traditional garb and dancing with swords, a tradition usually practiced at Saudi weddings.

I think this incident and the press that surrounded it was a very smart move by the United Kingdom. It shows cultural acumen and sensitivity as well as providing a great photo-op for the press. Prince Charles showed that western people can relate to and have camaraderie with the middle east, as well as strengthening the relationship between leaders of the two nations.

I think it was significant that this was “his second visit to the two nations in just under a year and his 10th official trip to Saudi since he first toured the nation in 1986.” It makes me wonder whether or not this is a way to “keep your friends close”…and well you know the rest. Not that the UK has any official issues with Saudi Arabia, but it is widely suspected that Saudi officials fund many activities the west has been trying to combat—if you catch my drift. So I wonder if this is the UK’s way of saving face and keeping up the appearances of friendship and solidarity. I could be totally wrong.

What is most definitely true is that participating in a cultural event such as this one is a great way to segway into what the “British ambassador to Saudi Arabia Jon Jenkins had said in a statement prior to the prince’s visit– that the royals were expected to discuss the need for reconciliation in the region and their hopes for its future.” Once you have made an effort to meet the host country half way, they might be more willing to compromise later.

I would argue that this is excellent Public Diplomacy on the part of the UK—it makes them seem very culturally sensitive and aware, something that can only help UK-Saudi (and hopefully Western-Saudi) relations moving forward.

50 thoughts on “Keeping up with the Saudi’s”