In the Fall of 2019 during my Sophomore year of college, I took a class called writers in print and person. In this course, I was able to develop my imaginative and intuitive thinking by engaging with contemporary texts, including poetry, fiction, and nonfiction. Through this process, I was able to learn about how an author conceives of and decides to execute a writing project, how their projects come to be the book we encounter as readers, and where the author’s intentions shape or diverge from our own experiences. After the class was finished reading each book, the professor invited the authors of the books to talk with the class so they could explain the intricate process of how a book is published. Through these author lectures, it got me thinking about the 2016 presidential election since the books we read were politically charged and for my final project, I wrote a nonfiction piece/research paper on the voting tendencies of metropolitan areas in the United States and how this affected the 2016 election. However, I took this paper one step further. In the spirit of this course being based around the publishing process of books, I created a zine out of the contents of this paper (hence why the paper is so short). Unfortunately, I cannot share the zine in this portfolio but, it was a unique experience and made this project one of the most fun to complete.

In the beginning, the United States had no cities. It was just a lush green wilderness where the main sources of income were hunting, gathering, and farming. This all changed when the industrial area started to implement its outcomes in the United States of America. It ended up producing a total of 381 metropolitan areas across the country (50,000 people or more), the most in the world which house a total of 249,253,271 United States citizens according to the US census which was last conducted in 2010 (Berg, 2012). Metropolitan areas now equate to a total of 90% of the United States economy including business, retail, and other big-box corporations (Florida, 2016). Not only do cities play large roles in our economy but they also have the biggest outcome in choosing our government officials, senators, mayors, and most importantly the president of our country. And in the 2016 election cities across the country were split into their beliefs and ideologies of which candidates were most fit for the job. However due to education, wealth, and promises for change, although candidate Hillary Clinton won the majority of America’s metro areas voters, Donald Trump swayed enough people in his favor for him to win the election.

Let’s start by talking about metro areas with a population of over one million civilians. Overwhelmingly, all of these cities voted for Hillary Clinton including the three largest metro areas in America being New York, Los Angeles, and Chicago in that order. In the graph below, the outcome is clear, 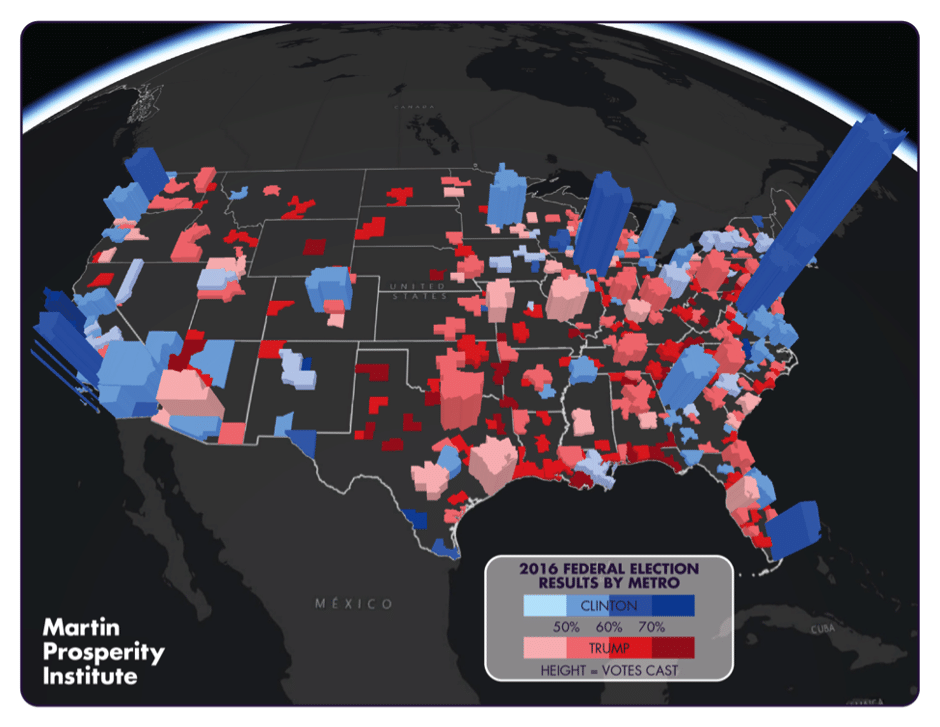 “The map below by MPI’s Taylor Blake charts the metro area votes. Clinton’s votes are in blue, Trump’s votes are in red, and the height of the bars indicates the percent of the national vote cast in metros. Look at the large blue columns for Clinton across the Boston-New York-Washington Corridor; in Miami, in Northern and Southern California, and Chicago. While there is more red on the map, there is nothing nearly so tall for Trump. (Florida, 2016)”

Although there is more red on this graph, the taller and wider bars representing larger metropolitan areas are shaded in blue signifying that Hillary Clinton won more than 50% of those metropolitan areas population. There are a variety of factors that contributed to this outcome the most important being education. Each large metro area had a highly educated population of people and this can be seen through the United states economy. According to Mark Perry an American Enterprise Institute economist, he concluded that America’s largest metro areas have a larger GDP than most foreign nations. Here is the evidence. 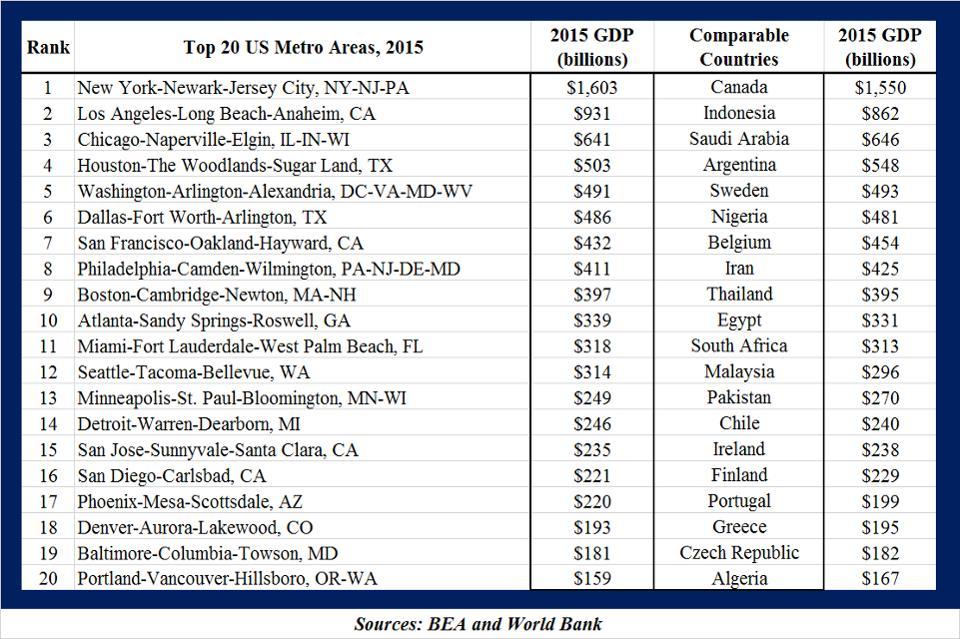 This Graph makes comparisons of the United States’ largest cities to Foreign nation’s GDP in billions. The total outcome of money in all 30 metropolitan cities combined is about 18 trillion dollars (credit to American Enterprise Institute).

This graph shows us that not only are these cities successful but also that they did not buy into Donald Trump’s campaign slogan of, “Make America Great Again.” The people of these metro areas were more tailored to Hillary’s way of doing business and knew that both economically and socially, her plan would benefit their goals of creating more jobs, wealth, and bringing more people into each of their growing cities.

However, less fortunate cities were looking for a change and they were looking for a president who could speak those words for them. This person happened to be Donald Trump. His slogan, “Make America Great Again” spoke to these people and they bought into it. And this promise translated into voters which are shown in this chart below.

This chart displays the percentage of voters who voted for each candidate depending on the category of the metropolitan area they fall in (Florida, 2016)

And as the chart entails, any metropolitan area under 1 million people voted more for Donald Trump. As the metropolitan areas get smaller, more and more people started voting for Trump to the point where there is not even a contest. Remember the first graph? Take a look at it again. Although the blue bars are large and healthy with numbers, they are sporadic and far in between while the red bars although small are littered across America. Slowly but surely, those red bars started adding up eventually outnumbering Hillary Clinton’s votes helping Donald Trump win this election.

All of these numbers tell a story of our country’s stance on politics. With these large swaths of data, it is easy to conclude that Donald Trump is favored by the American people, but not by much. He had won the metro areas of our county that need more money fast as they are declining in economic wealth. All of these cities with under one million people have a combined economic output of only 24.2%, not even half of the economic output of metro areas with over a million civilians. As a result, this causes budget cuts and a lower quality of education making people susceptible to being deceived by words with empty meaning. Make America Great Again is all they needed to hear they were on board with the idea and just rolled with it without a second thought. But, the other metro areas with more than one million people saw the loopholes of this slogan and saw how this could negatively affect our economy. They used their education skills to detect this problem ultimately voting for Hillary Clinton. Our country has spoken and there is no turning back; the data said it all, quantity always wins in a democratic society ultimately voting in Donald Trump.