How effective is propaganda? Well, considering I have multiple pieces of it hanging on the wall in my apartment and nobody ever questions it, I would say it is quite effective. Well-designed propaganda is imagery that sticks with us, that we feel a real familiarity to, and which also deeply convinces us of something, even if we don’t realize it.

These two posters I have, tacked up in the living room, wrapped in clear plastic leaf, are replicas of iconic British WWII propaganda, given to me by my grandfather. My grandfather is very proud to have “lived through the war,” even though he was only born in 1943, and he is also a proud Brit, as are most of my family. The posters, one of a “German & British Fighters & Bombers” warning and the other the classic “Keep Calm and Carry On,” exemplify this pride, and to my grandfather’s generation and above they convey almost as much patriotism as the Union Jack itself. 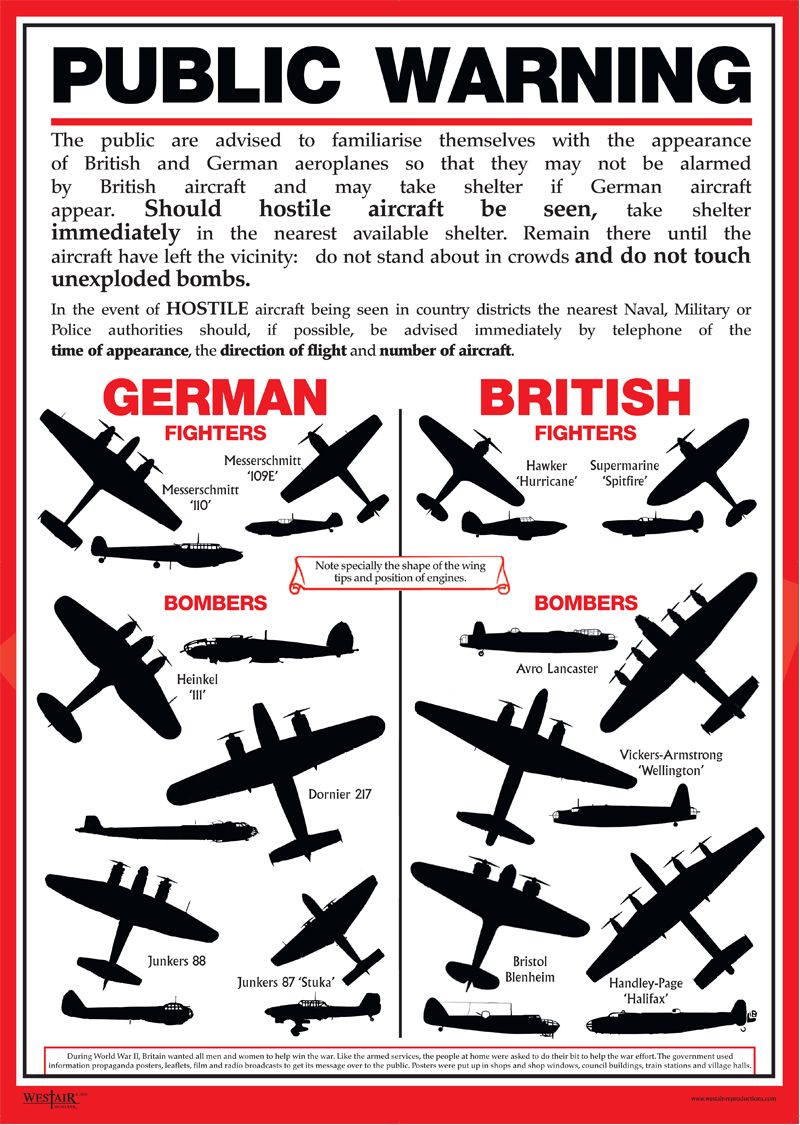 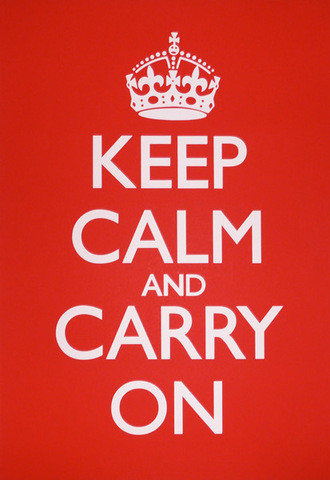 In her piece, Sheffield writes about the rhetorical situation of images which can be used to make an argument. The argument differs somewhat between these two pieces, but they are still very similar. For one, their audience is the same: both target the war-era British public, and the context is also the same: both were made during the German air-raids on England. However, the purpose, which Sheffield describes as “the overall goal for creating an image,” differs between the two (Sheffield). The former is, while propagandistic, mainly concerned with educating the public to help promote safety. The latter, on the other hand, is propaganda at its finest. It evokes pure patriotism, with a bold font, full use of English red and white, and the image of the crown to top it off. Of course, the public warning poster utilizes similar strategies also, using large lettering, varying font, and stark imagery to help inform and elicit a cautionary tone. Something that Hill writes about that really resonates with me is that

“patriotism is an abstract and complex concept,” which he refers to as “a ‘value,’ not a feeling (Hill 35).

Patriotism, he says, goes beyond the usual emotion-inspiring imagery, but rather the patriotic images conjure patriotic value, which then spurs the multitude of emotions that are tied to that..

Some argue that British patriotism has been dulled, or even corrupted. During the 2012 London Olympics “Keep Calm and Carry On” was plastered all over the world, on t-shirts, commercials, mugs, and soda bottles, with all imaginable spins and puns being utilized. Here, people argued that the image of wartime solidarity and strength was being over-commercialized, ruined by its tacky application as bumper stickers and Dr. Who memorabilia. Likewise, though more alarmingly, far-right groups in England have utilized pseudo-patriotic imagery, including reworking old propaganda, to try to push anti-immigrant “Britain-for-the-British” agendas. This, in some people’s minds, has further ruined British and especially English pride, with some only daring to fly Saint George’s Cross during World Cup football matches. However, both of these have been fought against, and I believe that a positive will come from it. Hill writes about this, as he utilizes the example of insurance companies using patriotic imagery, such as Iwo Jima, to create a positive familiar connection in viewer’s minds towards their cause (Hill 36). People often see through this, and are able to dismiss it. This has been the case with both the “Carry On” merch and, for the most part, with the English nationalists.

The posters on my wall are decoration, at that’s it. However, they do stir some kind of familiarity to a land I have never lived in, which is simply a testament to their effectiveness as rhetorical images.