While it seems to be getting less and less stylish to take and share selfies, in actuality, my sense is that no one has slowed down. The first accusation in conversations about selfies is their vanity. Critiques of selfies is an artistic sense often rely on this quality as a means of attacking selfies’ potential to be rhetorical in some way. This extends to selfies as a form of travel writing. The first sentence in the introduction of Kylie Cardell & Kate Douglas’s essay on selfies as travel writing immediately brought to my mind a famous picture. 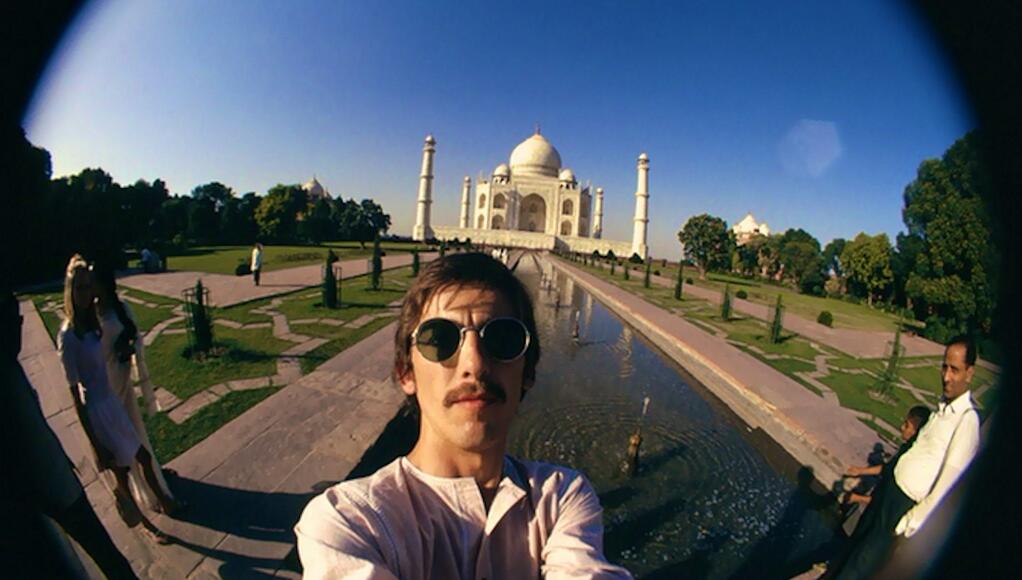 George Harrison, at 23, standing in front of the calm, shallow pool that reflects the memorial’s figure feels anything but vain. The fisheye selfie features the Taj Mahal as the one point perspective with reverence, not vanity. It highlights Agra’s beautiful greenery and their vibrant blue sky. If travel writing’s “purpose” (if it has only one) is to spur curiosity and inspire travel, this picture, for me, is a perfect form of travel writing. It says more without words than most stories could, while leaving mystery to provoke a serious desire to visit the Taj Mahal.

If Cardell and Douglas are right, and selfies are indeed on the forefront of travel writing, they’re nothing new. They’ve only been made ubiquitous.

In “Defining Visual Rhetorics,” the author makes use of very descriptive ekphrasis to detail advertisements and their use of gender roles and perspectives relative to environments in order to reach their audience and sell their product. The description of gender use in specific environments showed that time period’s attitudes towards the femininity and masculinity of fresh-aired nature environments versus polluted, brutalist industrial environments. It also signified the strict gender roles of this time period: specifically that women’s roles were to clean up after the men’s industrial mess, as described in the article with the advertisement for soap. The author’s use of ekphrasis helps the reader see the visuals of the ad he is talking about without actually looking at it but simply relying on the author’s description. The reader can see not only the ad but how the ad was used to express a view of gender roles and the environment that reflected society’s views at the time and was advantageous for selling their products.

Summer is the season of travel. It is during this time where many venture away from their old lives and take a break somewhere abroad to start anew. Last summer I knew I needed an escape from the mundane in my life here in Maryland. Waking up to the sound of lawn mowers buzzing, the feeling of muggy weather, and the sight of monotonous suburbia would not cut it for me this year. While helping my dad collect some ribs off the the sizzling grill I decided I wanted to go visit my family in Puerto Rico.

From the moment I stepped off the plane in San Juan, I breathed a sigh of relief. The seabreeze was exactly what I needed, both soothing and a perfect way to beat the summer heat. After the hellos, hugs, and kisses necessary when seeing your abuelos again, I was finally off on my way to the other side of the island. On the way to Aguadilla, Palm trees sprung from the ground a reminder of where I was and its difference from the home I left behind. Looking out the window from the air-conditioned car I saw beautiful greens, reds, and yellows danced together among the treetops and flowerbeds painting a portrait of harmony.

When we reached the house it seemed as if a matter of urgency came to the table, Spanish filling the corridors of the house, all to make sure the youngest grandson was fed. Soon enough cousins began popping up from the crevices of the island, more hugs and kisses ensued, and the food of Puerto Rico began appearing on the dining table. Rice with consemme, all types of meat, tostones, and sorullitos proudly on display. As the night fell, stars draping the sky the clearest I’d seen them in forever, the friendly banter died down, and under the moon’s gaze, sleep prevailed.

The next day we decided to do a popular summer activity, journeying to the beach. Seeing as we were on an island our selection of beaches was plentiful, however only one could provide the thrill I needed, Jobos beach. My tio is a veteran surfer and thus it was “in my genes” and a requirement I went to the waiting tides. I would wait for the swell of the waves and try to ride the clear water all the way back to the shore. There I could see little kids being buried in the sand by their parents and vendors selling kabobs to those falling prey to their stomachs. On the safety of the soft sand, I could dry off with my abuelos and watch my tio disappear into the waves and reappear on the other side of them. I swear the man is magic in the water.

The last stop made before I left the island was the rainforests. The rainforests are always bustling with life, although a great place to collect your thoughts, silence was nowhere to be found. Mist was flooding in and a storm was brewing but I came there to zipline over the area and I wouldn’t leave if I could help it. Once we reached the peak of the area and waited for the booming thunder and flashes of lightning to subside, I was finally able to get my wish. The view of the treetops from the zipline was magnificent, no words I say could do it justice. The colors of the island, mixed with early morning dew and stormy wetness, along with a passing rainbow surely made it a sight to remember. I had plenty of time to think while on the zipline as it took several minutes and I realized the ability to step out of my life allowed me to have a break and go on a new adventure while simultaneously instilling a sense of yearning towards my home and the normal routine of my life.

After saying my many goodbyes and giving my hugs and kisses, I was back on the plane home. Soon I would be back to the sound of lawn mowers buzzing, the feeling of muggy weather, and the sight of monotonous suburbia. But that was okay. Soon the long summer days would set, and as the leaves fell and the trees began changing color, a new journey would begin.